I’ve been practicing sustained lectio divina for a long time. Over the course of praying with many texts, I’m continually surprised by God.

Last spring, I finished a long lectio with the Gospel of Luke that took me two-and-half years. It worked out that I read chapter 22 and 23 during Lent and chapter 24 during the weeks of Easter. It was magnificent, but, to be honest, I was getting a bit worn down by the end. Reading Luke so closely had been intense. It had been a long journey and I was looking forward to a break over the summer. I began thinking that I would turn to the psalms, one of my favorite places to land in the scriptures for some lectio. So, I set my sights on the psalms even before I came to the end of Luke. I made a psalm notebook, copying the first 50 psalms that would be on the left page, with a blank page on the right for my notes. I had a method and I was ready to begin when the Spirit prompted. And, somehow, in some way I can’t quite explain God said, “Read Genesis.” Genesis?! Come on – I just read Luke. I want short psalms, not great big long narratives about patriarchs.

Surprise #1! It’s Genesis. I put the notebook away for another time. The Spirit of God propelled me into Genesis. Clearly God wanted me to know something here.

Often people will ask me – “How do I find a text?” First, you ask God for help and guidance. Say a prayer to God something like this: “I want to have a long conversation with you through your holy Word. What shall I pick up and read?” And then wait. You might have inclinations, so try it out. It might work or not. (I’ll use that psalm notebook one day.) The most important thing is to trust in the Lord and wait upon God’s invitation. It might be a surprise. Surprise #2.  I know now why God allows cell phones in our lives. Because there is an app called “voice memo” and this app saved my lectio group.

I have met with a small group of women for at least 12 years. We have gone through several iterations with various members. Most recently we decided that we would reconstitute the group around our love for scripture and shared lectio. We began to meet monthly about four years ago, with each person taking a month to share a lectio from their practice. Our connections to each other and to the text grew and blossomed. But over the years it became harder to get together each month. We are all soooo busy. We adjusted to summer schedules. We tried scheduling and re-scheduling. But something would always come up. At one point we had to make a rule: if one person drops that month, the group still meets; if two people drop, the meeting is cancelled.

Finding a Way to Reflect Together

During Advent a few years ago, we tried something new. Each of us took a Sunday and offered a reflection on the gospel reading. One person typed it, but I made a “voice memo” on my phone and sent the group an audio recording. The others tried it too. We began each reflection by reading the gospel aloud.

We struggled into the next year trying to keep meeting. Again, we found ourselves using voice memos the following Advent. Finally, as the new year began, we admitted that trying to schedule meetings was not working. We were at a breaking point.

Someone suggested that we try the voice memo method for the weeks of Ordinary Time leading up to Lent. We’d see if we could sustain it. And then Lent came and we kept at it. And then the Easter season, and we kept going. A right on through the summer and into this autumn. Now a group that could not be sustained face-to-face meets every week through voice recordings.

Surprise! God’s Word comes alive each week through the text and each person’s lectio (which are the best kind of homilies—speaking inspired by lectio!). God was not going to let our schedules get in the way. In fact, God seems to have wanted us to spend more time on our lectio. Together. There is something about lectio that takes a known or familiar text and makes you cry out: “I’ve never heard that before!” I’m reading the book of Genesis very slowly, each line and story and chapter. When I get to chapter 6, here is Noah. And I realize – I don’t know Noah. I mean I know about Noah and the ark but all it means to me is a lot of bad images from childhood and clichés and Christians searching for that boat on a mountain that can’t be found. I didn’t take it seriously. But God said, “Take this very seriously.” And I heard the invitation, “Spend the next 40 days and nights with Noah on the ark.” Surprise!  40 days and 40 nights is a long time to spend with Genesis 6 and 7. But I stayed. I stayed with Noah and his wife and their children and grandchildren and all the animals and seeds that they took with them. God’s word, this holy text, became my ark. Noah was my guide and I know him a bit better now. Ark of safety and salvation. It was time to be flooded by a new creation.

Divine reading, holy Word, lectio divina. When we seek out a new text for our lectio, when we adapt to new ways of prayer, and when we take a path we never anticipated, God loves to surprise us by this holy reading. 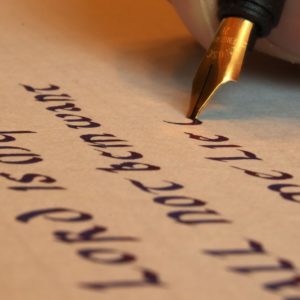 The Benedictine Center of St. Paul’s Monastery's School of Lectio Divina adapts the ancient monastic riches of sustained lectio divina to contemporary people. Through an intensive retreat experience set in the rhythm of life at St. Paul’s Monastery, participants receive teaching about lectio, spend time meditating on a sacred text significant for them, have the opportunity for individual spiritual direction, and participate in reflective conversation with other participants.

Kathleen A. Cahalan is Director of the Collegeville Institute Seminars and Professor of Theology at Saint John’s University School of Theology and Seminary in Collegeville, Minnesota. She is the author of several books, most recently, Opening the Field of Practical Theology, eds. Kathleen A. Cahalan and Gordon Mikoski (Lanham, MD: Rowman & Littlefield Publishers, Inc., 2014) and Living Your Discipleship: Seven Ways to Express Your Deepest Calling with Laura Kelly Fanucci (Twenty-Third Publications, 2015), Call It What It Is (2016), Calling all Years Good, edited with Bonnie Miller-McLemore (2016), and Christian Practical Wisdom, with Dorothy C. Bass, Bonnie Miller-McLemore, James Nieman, and Christian Scharen (Wm B. Eerdmans, 2016).

View all posts by: Kathleen Cahalan